Wired connections, like those of our seven powerline adapter kits, improve the stability and responsiveness of the network connection. So we concentrated on how fast each kit was able to transfer data. Overall, the best powerline kits were faster than Wi-Fi, especially as more obstacles were placed in between the router and the test laptop.

Our throughput test measures how much data can be transmitted through the network, measured in megabits per second (Mbps). For example, if you’re paying for 200 Mbps internet service, you’ll be able to download files and stream media at 200 Mbps to a laptop connected to the router via a wired Ethernet connection. Obstructions in your walls or electrical wire distance will degrade the Wi-Fi or powerline throughput, respectively. 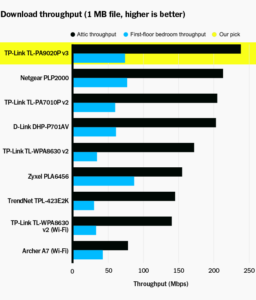 You’ll never reach the theoretical “gigabit” speeds listed on network devices, but the best powerline adapters are faster than Wi-Fi at the same distance.

Note that we’re testing these throughput speeds locally using a server: If your home has a 15 Mbps data plan, your connection to streaming services on the internet will be limited to 15 Mbps maximum, no matter how fast your router and adapters are.

As mentioned earlier, we tested throughput at two locations in our test home. The first site was in the attic about 25 feet from the router, but on the other side of a load-bearing wall and plate-glass window that decreased Wi-Fi signals. In general, the powerline transfer speed in an attic was quite fast, easily exceeding Wi-Fi over the same distance.

The other test location was in a bedroom two flights down, and on the other side of the home, a challenging 60-foot distance for both Wi-Fi and electrical signals. At this location, the best powerline kits still managed rates that were twice as fast Wi-Fi–only performance, while the worst two kits were a bit slower than Wi-Fi.

For comparison, during our last router test session the TP-Link Archer A7 router had no trouble maintaining almost 200 Mbps throughput to a similar laptop about 15 feet away, through a ceiling. 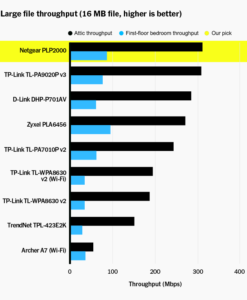 When we increased the file size to stress the adapters, the Netgear PLP2000 and the TP-Link PA9020P rose to meet the demand.

To challenge the network kits, we also ran the same test with a larger file for a shorter period to simulate a quick, massive burst of data that would really stress the network. Wi-Fi slowed a bit at both locations compared with the 1 MB file download tests, showing that the wireless network was becoming saturated at that point. However, the best performers, including the PLP2000 and TL-PA9020P v3, managed to provide double the throughput at both test sites compared with Wi-Fi. They had the extra headroom and just kept going, while the Wi-Fi connection direct to the router was really starting to show its limits.

The TL-WPA8630 v2 (both wired and with a Wi-Fi connection) and the TrendNet TPL-423E2K were no better than the Wi-Fi connection in the first floor bedroom. Both were rated Powerline AV2-1300, which goes to show that you shouldn’t expect advertised speeds simply because the adapter is rated “up to 1,300 Mbps.”

One notable anecdote: The G.hn-compatible Zyxel PLA6456 was fastest at long distance in the first-floor bedroom, but it was merely above average in the attic location. Therefore, we consider it a possible alternate if you need to cover a long distance or if our main pick and runner-up are out of stock.

5 Ways Mobile Devices are the Biggest Threat to Cybersecurity