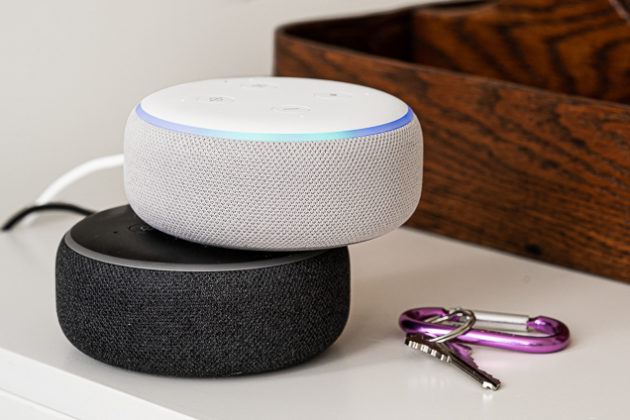 As both a devotee of doohickeys and a homeowner with a family, I’ve daydreamed about installing a high-flying security system, with a full roster of bells and whistles, only to balk when it came time to commit. And so Amazon’s recent release of Alexa Guard piqued my interest. With Alexa Guard enabled, any Echo speaker becomes a sentinel, able to employ the same sensitive microphones it uses for hearing your voice requests to detect the siren of a smoke detector or carbon monoxide detector, or the sound of glass breaking, and then send a notification to your smartphone. Besides being a nifty addition to Alexa’s already extensive bag of tricks, Guard sounds like a lightweight but clever alternative to a traditional home security system that for many people just might check all the right boxes.

So we decided to test Alexa Guard. Being reluctant to invite hardened criminals into my home for beta testing, I instead conscripted a pair of feisty kids, brimming with post-school energy, to play poltergeist and put Alexa through its paces. (It is an occasion all too rare when the supernatural and the smart home intersect.) For our tests, we arrayed our home with a handful of Echo devices—a pair of Echo Dot speakers, an original Echo, and an Echo Show—distributed across two floors. Perhaps not surprisingly, Amazon prescribes one Echo device per room to ensure coverage, which is a bit rich—I can speak an Alexa command and my second-generation Dot sitting 35 feet away will pick it up, like it or not.

To set up Guard, we went to the Settings part of the Alexa app, which is straightforward, though Alexa has issues keeping accurate track of smart devices and so listed some of ours multiple times. Only Echo-branded speakers support Guard (which means non-Amazon Alexa devices don’t), though at first only two of our devices showed up; we’re not quite sure what we did to fix the issue, but after we renamed them, all four Echoes eventually registered. (You can also choose to grant access to any compatible smart bulbs, which Alexa will then turn on and off in a random pattern to make your home look occupied.) Arming the system is as simple as saying “Alexa, I’m leaving,” with Alexa replying “All right, I’ll set Guard to away mode.” And with that, I set my children loose to do all kinds of haunted house-y things, which they do anyway.

While I monitored my Echo speakers, they wandered and stomped and slammed doors and shouted in the bloodcurdling way native to the undead and schoolchildren. This was a dead end, with Alexa remaining blissfully unaware of the surrounding havoc—to be fair, Guard isn’t designed to listen to bumping, stomping, moaning, or whining and is instead made to listen for specific audio signatures. My young spirits then upped their game by knocking a stack of books onto the floor, following that by dragging their sticky, snotty zombie fingers along the walls in a spooky, gross fashion, because kids. Again, not a peep from a solitary Echo.

Then, to speed things along (because it was getting toward bath time and it was a school night), a special guest ghost raided the recycling bin for an empty wine bottle, which he chucked into a recycling bag and then, in cold blood, bashed to smithereens using a wrench. Hark, an iPhone alert! Encouraged, he jabbed a broomstick into the test button of a smoke/CO detector (Wirecutter reviewed the best basic smoke alarms) and within 10 seconds received another alert. Pressing the notification on our iPhone took us to recordings of the incidents but also gave us a prompt to “Drop-in” and listen to a live audio stream, and even to speak walkie-talkie style through the alerted Echo. The results were clear: Should a homeowner be unfortunate enough to have problems with an intruder or a fire condition—or just a lively house phantom fond of downing wine and playing with matches—Alexa is a ready solution.

Just as with voice control, Alexa Guard isn’t constantly recording audio, and in fact listens only for key audio signatures as a trigger. While we had assumed our various Echo devices would be on high alert for voices and loud noises of any kind, Alexa was filtering the audio for sirens, alarms, and glass breaks. Even though you can find other listening devices that do one or another of these things (the Leeo and Ecolink Wireless Audio Detector, to name two), the ability to have a handy, Internet-accessible security system without needing to buy or configure new gear (assuming you already have an Echo or two) is terrific. And although Alexa Guard isn’t a replacement for a security system (Wirecutter reviewed the best security systems), it is a convenient and useful accessory offering real peace of mind to homeowners for the low, low price of free. Who said setting up a smart home has to be scary?

1. Alexa can help you guard your home, Amazon.com

Spread the love Advertisement In this video tutorial, the presenter would be explaining about varactor diode, it’s working, and its

What are the last Christmas delivery dates for Royal Mail, Amazon, eBay and Currys PC World?